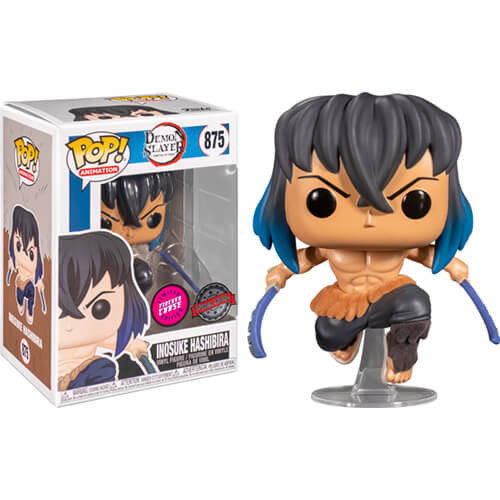 Demon Slayer: Kimetsu no Yaiba is the smash-hit Japanese manga/anime series which follows Tanjiro Kamado and his sister Nezuko Kamado, as they seek a cure to Nezuko’s demon curse. Tanjiro and Nezuko become entangled in the affairs of a secret society, known as the Demon Slayer Corps, that have been waging a secret war against demons for centuries. The demons are former humans who sold their humanity in exchange for power. They feed on humans and possess supernatural abilities such as super strength, magic and regeneration.

Funko’s new wave of Demon Slayer Pop! Vinyl Figures features plenty of your favourites from the series including of course Tanjiro Kamado and his sister Nezuko Kamado, three members of the Demon Slayer Corps; Giyu Tomioka, Inosuke Hashibira and Zenitsu Agatsuma, as well as the Demon King, Muzan Kibutsuji.

Here we have Inosuke Hashibira with this Unmasked 1-in-6 chance Chase Variant!

Truly an absolute must for any true fan of the series, add the Demon Slayer Pop! Vinyl Figures to your Funko collection today.