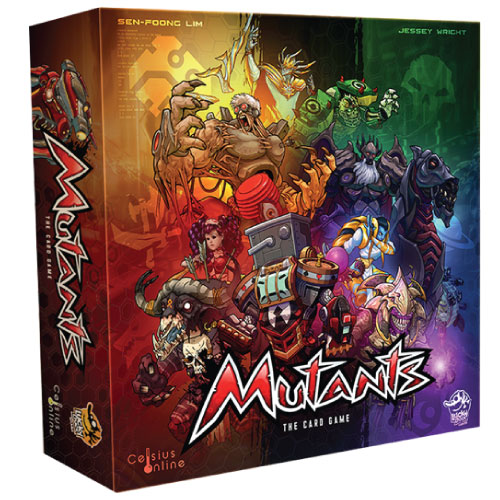 In Mutants, 1-4 players have to mix and match genetics to create the ultimate warriors and demonstrate their prowess in the arena. By dominating the arena and freezing the most valuable mutants, you gain Victory Points — and whoever gets most of them wins.

In each round, players take turns until all players have used every card in their hand. At the end of the round, the player whose token is closest to the top space of the arena track scores Victory Points based on the round track. The game proceeds in this way for five rounds, after which players reveal their archives and gain additional prestige based on the freeze value of the mutants they have placed there.

On your turn, you perform three steps.

The game is also provided with a solo mode called Uprising.
You win Uprising if you defeat the boss. Unlike normal Mutants, you do not win by gaining points. Instead, each time you would gain points you will reduce the life off the boss by the number of points gained. If the Boss ever has zero (or less) life, you win immediately!