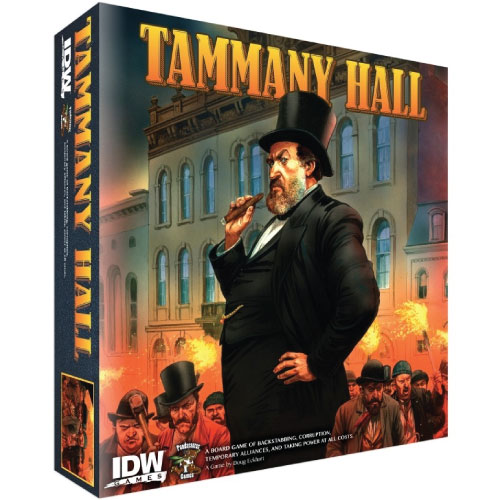 Tammany Hall is a board game of backstabbing, corruption, temporary alliances and taking power at all costs. If you want to rule New York, you are going to need to play the cities growing immigrant populations against one another. Help the immigrant groups who owe you political favors, call in those favors to slander your rivals and win election.

In Tammany Hall, players help immigrants settle in New York, collect political favors from those immigrant groups, send ward bosses into Manhattan to secure votes and slander political opponents. An election is held at the end of every fourth year, and the player who uses his power base best will be elected mayor. The Mayors grip on the city is tenuous at best. After every election, the Mayor must pay off his political rivals by placing them in offices that they can wield to try and take control of the city. Every player is your friend, every player is your enemy.

Tammany Hall was the political machine that dominated New York City politics by organizing the cities immigrant populations. While the organization’s influence spanned from its founding in the 1790’s to its collapse in the 1960’s this game is set during the height of Tammany’s power roughly between 1850 and 1870, the era of Boss Tweed. The game board is based on a map of Lower Manhattan in New York. The actual physical location of Tammany Hall moved several times through its history and one more time for the sake of our game.

Tammany Hall has been called a “Holy Grail” game by many gamers due to its great reputation and extremely limited availability.  Only 500 copies of the game were ever produced, and since then the game has only been available on online auction sites for premium prices.  That’s the reason for this kickstarter project.  Tammany Hall is one of my favorite games and I want to make sure it gets into as many player’s hands as possible.  I’ve teamed up with Stratamax Games to make sure this game gets the wide release it deserves.

The game was designed by Doug Eckhart and developed by the talented team at Stratamax Games, with artwork by the exceedingly talented Peter Dennis (artist on games such as Brass, London, A few Acres of Snow and many, many more)