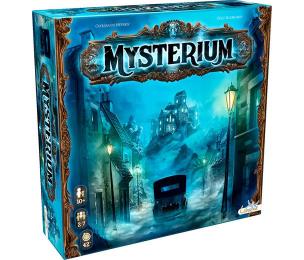 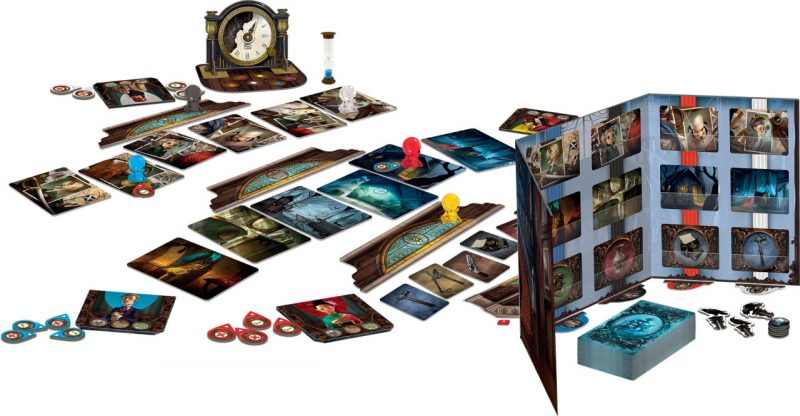 In the 1920s, Mr. MacDowell, a gifted astrologist, immediately detected a supernatural being upon entering his new house in Scotland. He gathered eminent mediums of his time for an extraordinary séance, and they have seven hours to contact the ghost and investigate any clues that it can provide to unlock an old mystery.

Unable to talk, the amnesic ghost communicates with the mediums through visions, which are represented in the game by illustrated cards. The mediums must decipher the images to help the ghost remember how he was murdered: Who did the crime? Where did it take place? Which weapon caused the death? The more the mediums cooperate and guess well, the easier it is to catch the right culprit.

In Mysterium, a reworking of the game system present in Tajemnicze Domostwo, one player takes the role of ghost while everyone else represents a medium. To solve the crime, the ghost must first recall (with the aid of the mediums) all of the suspects present on the night of the murder. A number of suspect, location and murder weapon cards are placed on the table, and the ghost randomly assigns one of each of these in secret to a medium.

Each hour (i.e., game turn), the ghost hands one or more vision cards face up to each medium, refilling their hand to seven each time they share vision cards. These vision cards present dreamlike images to the mediums, with each medium first needing to deduce which suspect corresponds to the vision cards received. Once the ghost has handed cards to the final medium, they start a two-minute sandtimer. Once a medium has placed their token on a suspect, they may also place clairvoyancy tokens on the guesses made by other mediums to show whether they agree or disagree with those guesses.

After time runs out, the ghost reveals to each medium whether the guesses were correct or not. Mediums who guessed correctly move on to guess the location of the crime (and then the murder weapon), while those who didn’t keep their vision cards and receive new ones next hour corresponding to the same suspect. Once a medium has correctly guessed the suspect, location and weapon, they move their token to the epilogue board and receive one clairvoyancy point for each hour remaining on the clock. They can still use their remaining clairvoyancy tokens to score additional points.

Mediums then group their suspect, location and weapon cards on the table and place a number by each group. The ghost then selects one group, places the matching culprit number face down on the epilogue board, picks three vision cards — one for the suspect, one for the location, and one for the weapon — then shuffles these cards. Players who have achieved few clairvoyancy points flip over one vision card at random, then secretly vote on which suspect they think is guilty; players with more points then flip over a second vision card and vote; then those with the most points see the final card and vote.

If a majority of the mediums have identified the proper suspect, with ties being broken by the vote of the most clairvoyant medium, then the killer has been identified and the ghost can now rest peacefully. If not, well, perhaps you can try again…